HOPE FOR HEMLOCKS OF KENTUCKY

Chemical Insecticides: The good, The Bad, and the Complicated
​

​
The use of powerful pesticides like imidacloprid is controversial, and for good reason. At Kentucky Heartwood we struggled with our decision to support the use of synthetic pesticides in the work to save hemlocks. Ultimately, we decided that the risks are worth it, after taking full account of the ecological catastrophe we are facing. The decision of whether or not to use these chemicals on your land should not be made lightly. Below, we’ve included some information about imidacloprid, along with some of our reasoning regarding its use.

By treating trees, we can:

Preserve intact populations of hemlocks, a keystone species in many southern Appalachian forests

Moderate habitat loss for the myriad species that use and/or benefit from hemlock, including rare and declining species

By choosing to apply insecticides to hemlocks we accept:

Risks to human health, mostly for the workers who handle the chemicals (Imidacloprid is not highly toxic to humans, but it is not non-toxic)

Risk of other unforeseen impacts: when we introduce new molecules into the environment it is impossible to predict or to detect all of their effects. Our knowledge is always incomplete. New problems may arise, or go undetected for years.

*Imidacloprid is never applied during drought, when soils are saturated or when rain is expected. However it is impossible to predict the weather perfectly, and  it is therfore not possible to prevent all cases of contamination, only to minimize their impact by following best practices.
Other Facts to Consider

Imidacloprid is widely used in American agriculture, the amounts used to treat trees pale in comparison to the amount sprayed onto the surface of row crops  and orchard trees each year. Unlike in row crop agriculture, imidacloprid is never sprayed onto the surface of hemlocks. It is taken up by the roots and adelgids encounter it when they bore into the needles. 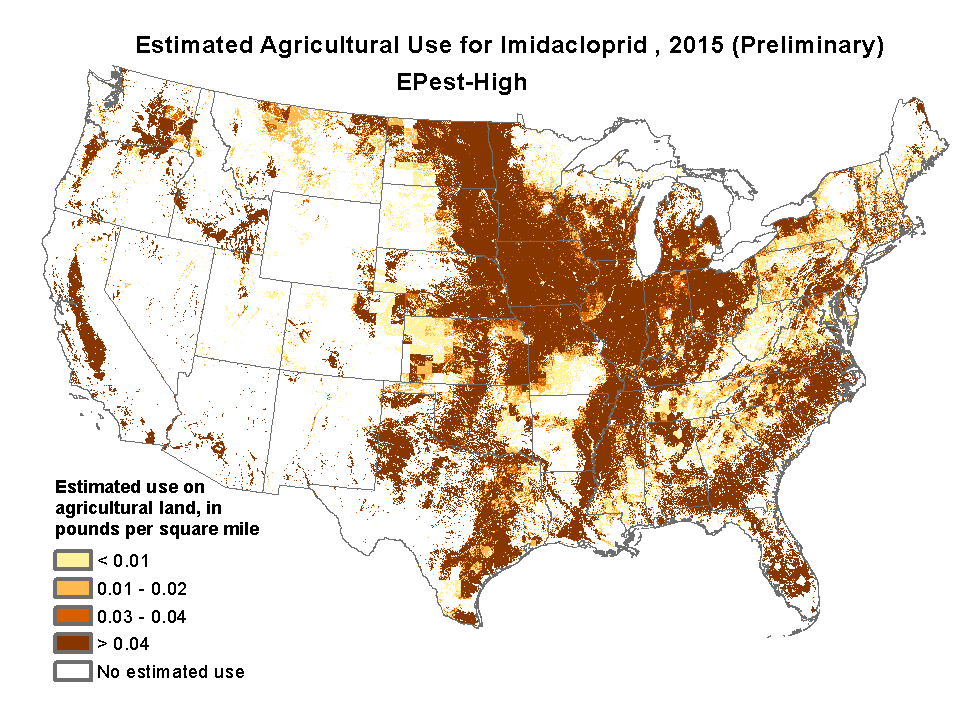 United States Geological Survey (USGS) data showing imidacloprid use in agriculture, 2015.
The European Union has banned the use of Imidacloprid and most other neonicotinoids for outdoor agriculture (but it can still be used in closed greenhouses).

The risk to pollinators is much lower when imidacloprid is used to treat Hemlocks, for a number of reasons. Hemlocks do not have flowers and bees and other important pollinators do not visit them.

In the presence of light imidacloprid breaks down fairly quickly (half life of a few hours), however without light it can be persistent.

Hemlocks regulate stream temperatures in their range. Their dense canopies keep streams cooler in summer and warmer in winter. The loss of this regulatory effect could be disastrous. Many imperiled fish and mussel species in Kentucky are found in streams that flow through hemlock forests.

Hemlocks are by no means the only tree species in our forest facing extreme threat. The American chestnut and the white walnut have been more or less eliminated. All species of ash are currently being decimated by another invasive insect, the emerald ash borer (EAB). Mature beech trees are being killed in enormous numbers by beech bark disease in bordering states. Black Walnut is also declining rapidly in all states adjacent to Kentucky as a result of thousand canker disease (TCD), also introduced by yet another invasive insect, the walnut twig beetle. If we wish to save our forests, we will have to use all the tools available.